You can grasp our dilemma: How can we help the persecuted in North Korea where the situation is grim and, since Covid, it has gotten worse?

A visit from a young man – and his story of escape – turned despair to hope. He came to say “thank you” for the help we provided on his journey to freedom . . . made possible with your prayers and support for Christian Freedom International.

He confirmed that what we are doing is critical . . . and that we must do more!

You know that North Korea’s totalitarian regime and its ruler Kim Jong Un has driven the nation to desperate poverty – economically and spiritually. Christians are tortured, sent to prison camps, and executed for believing in God.

In the past year, clever ways to smuggle aid and Bibles into North Korea . . . through cracks in the country’s closed doors . . . were sealed shut. Covid restrictions created treacherous barriers. Neighboring countries made life-saving efforts more dangerous.

Christians now face draconian punishments in South Korea for floating rice and Bibles into the country: up to 3 years in jail and $27,000 fine.

But ‘Kang’s’ testimony revealed what we can do – even under dire restrictions. (His name is changed for security.)

Read Kang’s story for four ways that we, with God’s power, can aid the persecuted:

You see, to tightly control people, the regime bans media from the outside world.

Yet people are starving for information and truth . . . and willing to risk their lives for it.

“I was able to listen to South Korean radio,” Kang said. “The more I listened to the radio, my discomfort towards the North Korean regime increased. When I became an adult . . . I decided to escape from North Korea.”

“Looking back from my own experience, and I didn’t know God, I begged to any entity for help and safety just prior to crossing the river from North Korea to China,” he said.

God heard his prayer – and our prayers for the persecuted!

He made it past the highly guarded border to China, where he was still in danger.

“Defectors in China are in life threatening circumstances,” he said. “They can be arrested anytime.” Kang feared people would “report my identity to local authorities” who would deport him to North Korea’s prison camps. He needed a safe place to hide.

Providentially, he found Christian Freedom International’s shelter.  Our safe house is stocked with food, clothes . . . and Bibles. It was here that Kang met God.

This kindness – provided with your support – prepared him to give his life to Jesus.

When he finally reached freedom the first thing he wanted to do was be baptized!

Kang came to our partner’s office to say thank you for helping him.

We asked him what Christians can do to reach North Koreans. Kang said, “Create an environment which allows them to be exposed to the goodness of God and Christianity. For example, someone praying together prior to leaving for their escape journey.”

Did you catch the clues for practical ways we can help? Here are ways to take action:

The highest-ranking diplomat to defect called North Korea “unique” among communist countries because it did not only clamp down on religion. It designed its own religion and “made people worship their leader”.

“I think it is very important to smuggle in outside information to educate North Korean people that the Kim family is not God,” Thae Yong-ho said.

North Korea keeps an iron grip on information. Covid restrictions and bans are blocking the already fragile paths for smuggling in literature and media.

But one way still works to share truth and shed lies: short-wave radio.

One defector said, “I could not stop myself from listening even though I knew I could be discovered and sent to a political prison camp. Just listening secretly to the radio for three nights, decades of indoctrination were peeled away.” (Go to our website to read more at our newsletter “Smuggling Truth Into North Korea”.)

We partner with defectors who broadcast into North Korea. These Christians speak the dialect and know the peculiar worldview. They are not “foreign” to the listeners.

Recently they revamped and added new programs. Previously they aired 30 minutes of news, then 30 minutes of Bible programs. Now they integrate the gospel into news and programs. Defectors tell how they met God in their stories of escape. Escapees who became pastors broadcast their sermons.

They also broadcast messages from U.S. congressmen. (Read the following newsletter for one U.S. Senator’s powerful gospel message that was broadcast into North Korea. Pass it on to educate and encourage others.)

Are the broadcasts effective? North Korea’s regime tells people not to listen to foreign programs that mention God because, they claim, it will corrupt their minds. What better proof can there be that programs like these are hitting the mark! (An added benefit is elites may be listening to monitor them. Pray for their hearts to be open to the Truth.)

I’ll be blunt: We need to open another shelter.

People like Kang need safe houses along their escape route. The journey has become more dangerous as China is deploying facial recognition technology to identify and monitor people under the guise of Covid restrictions.

China’s heightened surveillance forces escapees to stay in shelters longer. This delay prevents opening space for others, and to be honest, creates friction as numerous tense people are jammed into a small place.

Please pray for secure places and God’s peace among the safe house residents. The cost for one safe house is about $3,100 for six months.

Along with food and clothes, our shelters are stocked with Bibles. We recently sent solar-powered audio Bibles to replenish the supply because, to our delight, escapees take the Bibles when they leave.

When the audio Bibles arrived, our partners (who are defectors) tested them. They were thrilled to hear their North Korean dialect! And asked to keep one for themselves.

In case you are wondering, a solar-powered audio Bible costs about $30 each. Pray that God’s word will be “a lamp to my feet and light to my path” for Christians in dark places.

Prayer: Advocate for the persecuted

Prayers are powerful. Read again how God answered Kang even before he knew Him!

To help you pray, enclosed is a “Prayer for North Koreans.” Give copies to your church, Bible study, and prayer groups. Use it to educate others about life for persecuted Christians not only in North Korea, but other oppressive countries.

Mark your calendar on April 28 for the International Day of Prayer for North Korea. This day was designated by Christian escapees to pray as one. Join us to intervene together.

Together we can support persecuted Christians in North Korea and other countries of persecution. Thank you!

P.S. Kang shows that even in totalitarian places like North Korea, God is active and we can join in. Right now, we need to open another shelter as well as equip Christians with Bibles and aid.

Will you support persecuted Christians in perilous places in practical ways?

Feel free to make copies of the enclosed prayer poem to share and educate others. Thank you for caring for persecuted Christians. 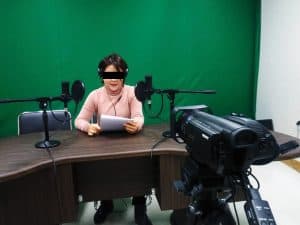 ‘Kang’ (pictured at the top) escaped North Korea. His journey began by listening to forbidden radio broadcasts. On his way, he hid at CFI’s shelter where he read a Bible and met God

It finished when he appeared at our partner’s office to say, “thank you”.

“I thank you so much.

“The whole world knows about your suffering and your dream of freedom. Together we hope that a new day is coming soon.”

“The world’s greatest leader and teacher, Jesus of Nazareth, once said, “You will know the truth and the truth will set you free.” What a promise. This is what I believe He meant.”

“‘Freedom’ begins inside each of us when we come to know Jesus, who is the truth. The truth is not just facts, it’s a person, and His name is Jesus. When we are free in our hearts and minds with Jesus, we can be free even when living under a tyrannical government on Earth. It won’t ever be powerful enough to control us.”

“‘Truth’ and ‘freedom’ cannot be defeated. The Jewish ancestors of Jesus were enslaved and imprisoned for centuries but are now a free people. Americans lived under foreign tyranny for more than a hundred years, but after our Revolution, we became the freest people on Earth. You are next.”

“We pray to God that your long night of suffering will soon be coming to an end. With a fervent prayer of faith, hope and love for you.”

Please consider passing this newsletter link on to a friend when you are finished reading it.